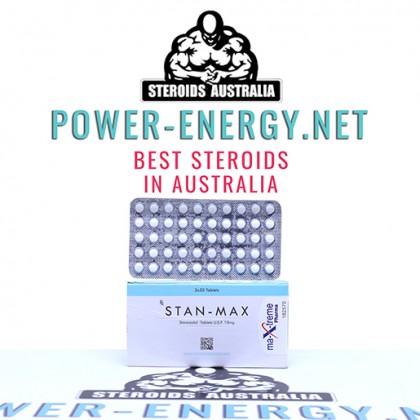 Stan-Max by Maxtreme Pharma is a well-known Stanozolol-based steroid. Stanozolol (also known as Winstrol) by this company can be bought in the form of pills (100 tablets x 10 mg). You can also buy Stanozolol in injections but many people prefer the oral form. Initially it has been developed for veterinary medicine for increasing horse endurance. At the same time, it was used for treating anaemia and swelling. But very soon it was used in sports mainly for gaining defined muscles as a result of its fat-burning effect.

Winstrol is widely used by sportsmen as it provides quick and good quality muscle growth. It is also allowed to be used by women and those who are beginners to the use of AAS. The active agent makes the muscles much more defined, so sportsmen often use it during preparation for a competition. One of the advantages of this anabolic is that it reduces the globulin level that binds sexual hormones in the blood. Due to this, any steroid used with it will have a faster effect. It is taken by weightlifters, bodybuilders, powerlifters and track and field athletes (in minimal doses).

The main effects of Winstrol:

The best cycle duration is 8 weeks and no interruptions should be made. Stanozolol in pills has a short-term effect (injections have a longer effect). For beginners, 20-50mg of the drug should be taken daily. The more experienced the sportsman is, the higher the dose can be used. The dose should be increased gradually to optimal dose. Although this is a rather mild drug, the allowable dose for women should not exceed 5-10mg, as in this case a higher dose may lead to virilization.

Winstrol by Maxtreme Pharma is commonly used with different anabolic steroids as it is well-combined with many drugs. The combination always depends on the goal. For muscle growth it is also combined with Oxymetholone (Anadrol). A combination with Trenbolone is best suitable for losing weight as it is does not have aromatizing properties.

If the recommended dosage and cycle length are exceeded, the following side effects may occur:

Athletes often leave online feedback about this anabolic. According to many sportsmen, it is very efficient. Complaints about side effects are very rare and only occur due to extreme dosages.