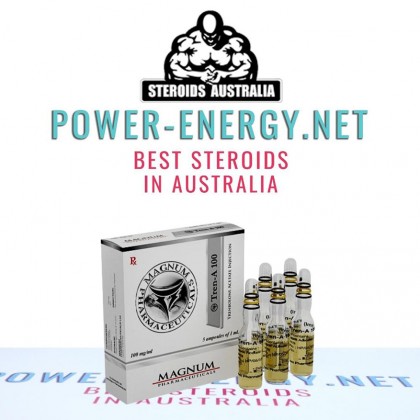 The active substance of the drug Tren-A 100 is Trenbolone Acetate, which is a powerful steroid with anabolic and androgenic effects on the body, presented in the form of a substance dissolved in oil. Trenbolone acetate is the most common form of Trenbolone, characterized by a short period of exposure to the athlete's body. The drug is used to increase the musculature, physical indicators, as well as to create muscle definition.

Properties and effects of the drug

Trenbolone Acetate prevents the occurrence of gynecomastia and does not allow excess fluid to accumulate in the body. It helps to gain high-quality muscle mass and increases strength and endurance indicators. Trenbolone acetate also gives stimulation to the Somatropin hormone, which reduces fat deposits and turning them into energy.

To avoid side effects, you should monitor the dosages and do not exceed the recommended norms. The optimal dosage of Trenbolone Acetate is from 50mg to 100mg every other day. The course lasts about 1.5 months. Initially, you should start with small dosages, gradually increasing them to the limit, so that the body can get used to the drug.

Combinations with other drugs

A cycle of Trenbolone Acetate should be combined with Gonadotropin in a dosage of 500-1000 IU once a week. The steroid is quite strong, so it is most often taken solo. If an athlete wants to gain dry muscle mass, the drug should be combined with Anavar or Winstrol. When combined, it is recommended to take half the dosage and for no more than 2 months. It is best for professional athletes to include Testosterone Enanthate and Nandrolone in the course. The duration of this course is about 4 months.

It is recommended to start post-cycle therapy (PCT) 2 weeks after the last injection of Trenbolone Acetate. The PCT should include Clomid or Toremifene. It is undesirable to use Tamoxifen, as it can cause side effects. In order to restore the natural level of testosterone in the body, it is worth using testosterone boosters for a month. It is also necessary to follow an appropriate diet.

Trenbolone Acetate is an anabolic that can cause side effects, especially with prolonged use. The most common side effects are: headache, acne, drowsiness, mood swings, increased appetite, reducing the level of your own testosterone or an allergic reaction.

If you follow the instructions for use, and also do not reduce physical activity, the results from a Trenbolone Acetate cycle will be positive and fast-acting.