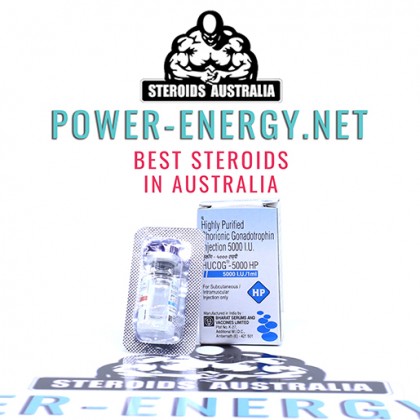 Human chorionic gonadotropin is a gonadotropic agent and it is a hormone that is produced by the placenta of the female human body and excreted in the urine, from where it can be extracted and purified.

Human chorionic gonadotropin stimulates, due to the biological action, steroidogenesis in the gonads, similar to human luteinizing hormone. It also has the characteristics of luteinizing hormone (LH) of the anterior pituitary gland, but with a greater potency due to its longer half-life.

In bodybuilding, perhaps only one property of gonadotropin is appreciated, which is an increase in the secretion of sex hormone production (testosterone) by the testes. As a result, gonadotropin is used as an agent for gaining muscle mass, as a weight loss aid and as a component of PCT. You can always buy HCG 5000IU in our online steroid shop in Australia.

The use of HCG 5000IU for anabolic purposes is not justified and is dangerous for the health to use is for this purpose. First, because human chorionic gonadotropin is less effective than anabolic steroids. Secondly, in order to obtain a good effect, it becomes necessary to use it in large doses (more than 4,000IU per week), which can cause irreversible disturbances in the physiological axis of the hypothalamus-pituitary-testicle arc. Due to this circumstance, many articles speak negatively about hCG for this use, forgetting about its true and main purpose.

In bodybuilding, the use of chorionic gonadotropin is justified and even necessary exclusively as PCT for the prevention of testicular atrophy. In this case, its use is safe, because the doses of the drug are much lower, in addition, chorionic gonadotropin allows you to eliminate some of the side effects of anabolic steroids, as well as preserve the gained muscle mass within the cycle.

HCG is of particular importance if a steroid cycle is longer than 4-6 weeks or high doses are used within the cycle. In this situation, HCG 5000IU does not disrupt the work of the hypothalamus-pituitary-testicle axis and most importantly, it allows the testicular function to be preserved and continue with its normal functioning.

How to take hCG

If we talk about how much hCG should be injected, for an example, the notorious Bill Philips advises to take 4,000IU (International Units) per week for two to three weeks. But for the average sportsman who wants to keep his testicular function alive and running and if not taking heavy dosages within the cycle, 500-1,00IU a week should be sufficient for this purpose. However, there are other recommendations, according to which the intake of hCG should be approached individually, based on how long the steroid was, the type of cycle that was run, how high the dosages were and also, what drugs were used.

One of the favourite Australian bodybuilders has the option in which 1000-1500IU of gonadotropin is injected every second day for advances users who need the heavy recovery properties that this substance can provide. On the other hand, according to research by scientists, a single injection of hCG of about 1,500IU increases the plasma testosterone level by 250-300% and this level lasts for several days after the administration. Therefore, it is possible that more infrequent injections, say every five days, would be more appropriate in this case.

If we talk about how long one should use gonadotropin drugs for, then almost all of the sources will tell you that no more than three to four weeks’ maximum, due to the uptake of hCG by the body. Otherwise, in these higher dosages, the testes will react very poorly to hCG injections and even to their own release of the luteinizing hormone, which can lead to the hypo function of the testes.

At the same time, the pauses between cycles of gonadotropin, according to all the same experienced users, should be at least six months in length, although for a bodybuilder, this can differ, as they are using steroids for eight to ten months per year and with this condition, it is difficult to fulfil the recommended adherence of these regimes.

The answer to this question is also ambiguous. In Australia, it is common practice when hCG is injected after the end of the steroid cycle. It is also believed that it would become more reasonable to start the cycle of hCG while the steroid dosage is being reduced while the anabolic are still active within the system.

As soon as you start reducing your steroid intake, your body becomes increasingly testosterone deficient and as a consequence of this, some loss of strength and muscle volume can be observed already at this stage, although the unique property of steroids is that they have anti-catabolic effects and even relatively small dosages are able to maintain these muscle volumes and strength indicators even with a lack of calories, but do not be fooled, after the steroids start to leave the body, these great effects also leave the body with the substances.

When it comes to very long steroid cycle, usually three months or longer. In these cases, it is very advisable to run a 2-3 week cycle of hCG in the middle of the steroid cycle. This will at least somewhat provoke the testes to stay active and still product a sufficient amount of the natural hormone. HCG has become a major part of many steroid cycles these days for the male’s health and support while using these surprising anabolic agents.

You can buy genuine hCG and other gonadotropin drugs here within our online store at affordable prices, to ensure that you have all the preventative measures in place before starting your dream cycle and transforming your body for that desired look.