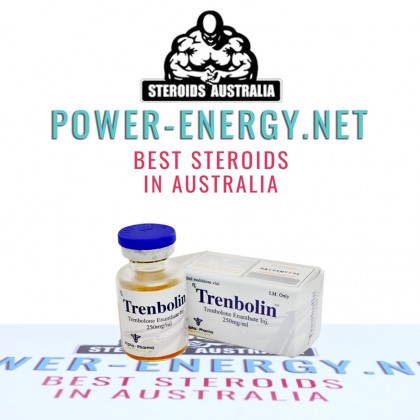 Trenbolin is a modern drug of steroid origin. It is based on the active substance Trenbolone with the binding of the Enanthate ester. The drug has a number of universal functions that make it one of the main steroids used by athletes in the pre-competition period. The steroid is used in various sport disciplines; to a greater extent it has gained wide popularity in bodybuilding. Athletes appreciate Trenbolone Enanthate for its quality of gaining muscle mass, burning fat and increasing strength.

Trenbolin is produced by the Indian pharmaceutical company Alpha Pharma, which produces the drug in the second generation. Thanks to this, you can buy Trenbolin in Australia. The company has been distinguished by its remarkable quality for many years!

The first reports about the active substance Trenbolone Enanthate appeared in the 20th century, at that time there was no question by people about using this tool. Initially, Trenbolone was developed for active use in veterinary medicine. It made great progress in the development of the growth of cattle, accelerated the growth of large volumes of meat, increased the appetite of the animal and its general physical condition. Soon, to control the duration of the drug's action, by analogy with testosterone, essential oils were tied to Trenbolone, which allowed it not only to control the work of the drug in the animal's body, but also encouraged the possibility of using the steroid by people. There are three types of Trenbolone: acetate (short), Hexahydrobenzylcarbonate (long), Enanthate (extra-long).

The first thing to note is the duration of its action, the period of work of Enanthate in the body is about 10-12 days after the last injection, while the half-life is 7-8 days. Thus, there is no need for frequent injections (1-2 times a week is enough to achieve maximum effect).

It is important to say that Trenbolin is a powerful anabolic steroid with strong androgenic activity. Therefore, this drug is not recommended for beginners, it is more suitable for experienced athletes who have already completed quite a few courses previously.

Expected reactions from taking the drug:

- Fast and high-quality increase in muscle mass of up to 10kg per course;

- High potential in fat burning (due to increased production of growth hormone);

- Anti-catabolic effect, decrease in cortisol, increase in libido during the course;

- A large increase in strength indicators (up to 40%).

Important: for sports purposes, it is recommended to take the drug only for men! Female athletes should not use Trenbolone, due to its pronounced androgenic effect. After performing even one injection, a woman may face virilization (the development of secondary male sexual characteristics).

How to take the course and what is best to combine with?

In fact, there can be many variations of cycles with "Tren" Enanthate, the properties of the drug are universal, and therefore, depending on your goals, experience, and money, you can combine the drug with absolutely any anabolic–androgenic steroids (AAS).

For a qualitative increase in muscles, the best combination for you will be Trenbolone Enanthate, Testosterone Enanthate and Winstrol, while the dosages will be as follows: Testosterone Enanthate - 250mg per week, Trenbolone Enanthate – 200mg per week and Winstrol - 50mg daily for the initial 6 weeks. The course lasts for 8-10 weeks. On the 10th day, Proviron is added - 25mg daily ending with the 8th or 10th week. A week before the end of the course, Post Cycle Therapy (PCT) is added - Clomid (50-100mg daily) for two weeks.

For the growth of strength and muscle volume, it is recommended to take Trenbolone Enanthate together with Testosterone Enanthate. In this case, the dosages will be distributed as follows: Trenbolone - 200mg weekly, Testosterone - 500mg weekly, Gonadotropin - 500IU every third day staring from week 4 until week 7. This course lasts 8-10 weeks. After two weeks form the final injection, start taking Tamoxifen or Clomiphene Citrate within your PCT.

Men during sexual development: irritation of the bladder, gynecomastia and priapism.